Man who was homeless for decade 'hired on spot' in time for Christmas | Metro News
... Malcolm was forced to live in a tent in Kennington Park, south London, in 2010 after his father – who had Alzheimer’s – passed away and he couldn’t afford to keep his family’s Camberwell house. ...
Posted by Kennington News at 11:26 No comments:

Dear Companions
This year I determined to finally lead my first walk for Forest Ramblers after thinking about it for some time.  I initially thought to follow the course of the River Effra, one of many lost rivers now buried under London, all making their way to the Thames.  They do still rise during heavy rains.  In our campaigning days we complained locally to the authorities about flooded drains; however, it was just the ‘lost’ rivers doing their thing, in particular the Effra rising outside the Oval tube station.  I did a couple of recces with Veronica L [who lived in Herne Hill where the Effra rose in their basement from time to time] and Mavis; however, we concluded that whilst the river is interesting, the walk wasn’t, so I set about devising with Muriel a walk from the Elephant & Castle shopping centre to Vauxhall, zigzagging through Kennington’s green spaces.  The group completed the walk earlier this month with excellent feedback so I was well chuffed.
We only managed 24 bus routes this year so still over 120 to do.  We did get out as far as Alperton in the west, Belmont prisons in the south, Beckton in the east and Southgate in the north.  Helen and I were back in Alperton this month for a delicious Lamb Biryani served like a pie in the Guajarati style, after which we visited the remarkable Hindu temple.
Ladies Who Lunch had a couple of outings this year: to the Polish ‘Mamuśka’ and the ‘Vincent Rooms’, a college for trainee chefs with alumni such as Jamie Oliver, Ainsley Harriott, and Antony Worrall Thompson.  Gisella invited Marie and me for lunch, on my birthday as it happened, at the Chinese ‘Firecracker’ as she’d sold her flat and was moving to St Albans the next day, all rather sudden, although it’d been on the cards for a while.  Mike and Liam invited me to their home for a three-course lunch, my first vegan meal – delicious!  Sadly, they too have moved away, down to the south coast.  Several Companions joined the Huguenot Society for a guided walk around Greenwich.
Mary organised an outing to the local Cinema Museum to watch the classic ‘Grapes of Wrath’ with a young Henry Fonda, which I’d never seen before.  It was quite wonderful and several of us then watched a program on TV explaining how the dustbowl and subsequent depression came about.  A couple of days later I joined the River Thames Society for a walk from Pimlico to Blackfriars and suggested that we all go to the Museum, which hardly anyone had heard about, so we did in October, with coffee at Jamyang Buddhist Centre’s Courtyard Café, then an excellent late lunch at Toulouse Lautrec Brasserie.  Part of the tour of the Museum includes screenings and they included a film about the River Thames from 1959, which was special.  Several Companions also joined RTS’s visit to the Migration Museum, where I also took a group from Mosaic Clubhouse, when neighbour Veronica P joined us, on Nelson Mandela Day in July.
Years ago during our voluntary work, we raised funds to light up the huge plane tree at Kennington Cross.  There had been a tragic incident around that time of a boy, Alex, becoming victim to the knife crime that now afflicts the young people in our cities so we called it The Tree of Hope.  Recently the lights were out… and the community felt the loss.  I enquired of Kowsar and Angus, the key players behind the lighting, and learned that Transport for London had pruned the tree, and cut the cables – into shreds!  I took pity on their crestfallen faces and offered some admin support to get the lights back on.  We networked our way through the tangle and TfL agreed to put matters right.  Thoughts then turned to a formal Lighting Ceremony and I suggested that we ask Mr Richard Taylor to do the switch on.  You may recall that in 2000 there was a dreadful incident when a child, Damilola Taylor, was stabbed to death in Peckham, south London, on his way home.  His parents set up a Trust to campaign and work towards better things for young people.  Kowsar and Angus agreed that Mr Taylor was the right person to turn on our Lights – now I just had to find him!  The family were from Nigeria so I thought he might be there.  I turned to Bola who’d invited me to the Yoruba royal wedding last year, although realised it was a long shot.  Amazingly she said she’d make a phone call and get back to me!  Turns out she woke up a friend who was asleep in California but was on the case.  Next thing I know, I’m talking to Mr Taylor who readily agreed to switch on our lights for us!  The event took place this month.  Angus put on his vicar’s collar and drove to collect Mr Taylor from his home, and we had such a lovely gathering, with Kowsar providing food from his restaurant, the local primary school playing the steel pans, and much joyfulness abounding.  Wonderful! 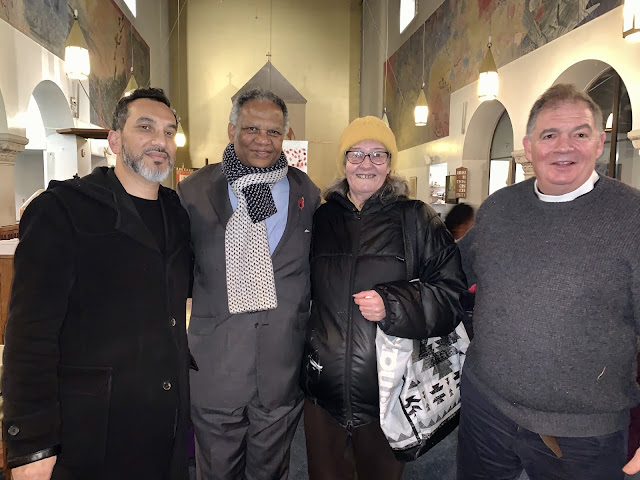 Posted by Kennington News at 09:31 No comments:

'The London Underground’s Northern line isn't fit for purpose and the only way to fix it is to build a Southern line' - Ellie McKinnell - MyLondon
... There's also all the talk about the Northern line extension to Battersea, which is planned to be completed by the end of 2021. This would add on two new stops, Battersea Power Station and Nine Elms, and join the rest of the line at Kennington, where it currently splits in to the Bank and Charing Cross branches. ...
... When you arrive at Kennington in the morning, on a Bank branch train, a couple of people will get off to change to the other branch, releasing a bit of the intense pressure in the carriage, and perhaps a couple of people will manage to get on, if they're lucky. ...
Posted by Kennington News at 09:23 No comments:

MP Moran and Sons achieve FORS Gold membership – Builders Merchants Journal
... MP Moran and Sons has been operating for over 43 years as a family business, with branches in Kilburn, Watford, West Hampstead, Willesden, Kennington, Co Kerry and Co Mayo in the Republic of Ireland. For further information call 0843 600 5566 or visit https://www.mpmoran.co.uk. ...
Posted by Kennington News at 12:12 No comments:

South London keeps red flag flying high… Labour retains it grip in Lambeth – South London News
... “I will be a tireless campaigner for you, whether you live in Brixton, Kennington, Vauxhall, Stockwell or Clapham – for struggling small firms and Europeans who could not vote.” ...
Posted by Kennington News at 12:04 No comments:

'My makeover at Santa’s workshop' | London Evening Standard
... Five minutes into Santa School, I am already on the verge of being flunked. “Most Santas are clean shaven but you have a ginger beard, which means you get a ‘shoddy’,” tuts James Lovell, the director of the Ministry of Fun’s Santa Claus training programme in Kennington. “In other words, it’s a major cross through the appearance box.” ...
Posted by Kennington News at 12:02 No comments:

Stormzy Bible reading to end BBC One's Christmas Day | Music | The Guardian
... Stormzy attends the Word of Grace Ministries church in Kennington, south London, and has often referred to his Christian faith in his music. A two-part song on his 2017 debut album Gang Signs & Prayer, Blinded By Your Grace, was addressed to God, with lyrics including: “Lord, I’ve been broken / Although I’m not worthy / You fixed me … You came and saved me”. In a GQ interview that year, he said of the album’s No 1: “I give it to God.” ...
Posted by Kennington News at 11:57 No comments:

MP Moran and Sons support next generation in builders merchants – Builders Merchants Journal
... MP Moran and Sons have been operating for over 43 years as a family business, with branches in Kilburn, Watford, West Hampstead, Willesden, Kennington, Co Kerry and Co Mayo in the Republic of Ireland. For further information call 0843 600 5566 or visit https://www.mpmoran.co.uk. ...
Posted by Kennington News at 01:18 No comments:

Sign up here to receive a daily listing of what's in the news in Kennington!

Most viewed posts in last 7 days

Most viewed posts in last 30 days